UB Imprint Vol 15: Building International Partnerships for the Advancement of our Students: The UB-Canada Student Exchange

Building International Partnerships for the Advancement of our Students: The UB-Canada Student Exchange 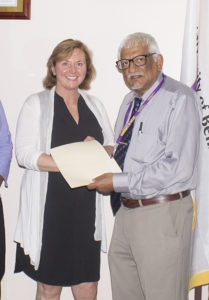 The University of Belize (UB) has relationships with numerous international learning institutions that have resulted in solid Memoranda of Understanding that improve cultural and educational knowledge between countries. For over a decade, UB students have represented Belize in exchange programs with Canada. On Thursday, November 14th, 2017 UB President Clement Sankat signed an agreement with Vancouver Island University of British Columbia, Canada to further promote students and staff exchange between our Universities for the purpose of study, teaching and research. The agreement further opens doors for collaborative research projects, as well as exchange of information and publications of common interest. Mrs. Sharon Palacio-Moro, Coordinator of Student Services for UB, has been instrumental in this exchange program that is actively engaged with other institutions in Canada.

(The Canada Bureau for International Education (CBIE) administers the Emerging Leaders of the Americas Program (ELAP). For the past eight years the Canadian government has funded ELAP and subsequently enriched the experience for UB students who spend a semester in North America. For 2017-2018, 3 UB students have taken the opportunity; 2 enrolled at Thompson Rivers University (TRU) and 1 at Huron University College (H.U.) in Canada. 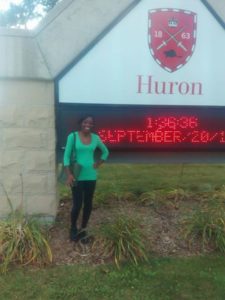 The exchange program between UB and H.U. has been ongoing for 12 years. Erin Gabourel is the sole Belizean at the institution. “Being exposed to a new culture and academic influence, I am really inspired to be great, just by being a voice, and showing others from a well-developed country, that I am able to compete and learn at their level. It was culture shock when I saw that I was the only ‘black’ individual in 3 of my classes. Reflecting on it makes me want to strive for success even more.”

It’s been an arduous but blessed life for the 21 year old Belize City resident who is the third born of seven siblings. Erin says “I was reared by both parents Dana and Kenrick Gabourel. I am also a passionate youth pastor and worship leader at Merirh’s Ministries. I grew up very poor and I didn’t have the privilege to get the best clothing or food. My mom was a hard worker and ensured that her children had something to eat and that we all went to school. Sometimes noodles was all that we ate, but both parents taught me to be grateful of whatever we got to eat, because many may not have anything to eat. I have always told myself that I will make a difference and help my family in return.”

While at H.U., Gabourel is enrolled in courses complement her major at UB. She chose Social Work and Counselling as her career path, because it involves the well-being of others. She is about to complete her Bachelor’s Degree and reflects on those who have helped her. “My 4 years at the UB has been a struggle, as my adopted mom, Apostle Suzette Massiah is paying my way through college. There were times when my Area Representative, the Honorable Wilfred Elrington would also assist me through the Ministry of Education, in order to pay my way through school. My adopted mom taught me about the qualities of life and she encouraged me to know that I am able to overcome poverty by determination and hard work. She was the first to tell me that I am beautiful, and also the one who taught me the Word of God, which has enabled me to be an Ordained Youth Minister of the Word of God. I know that with persistent determination, the right support, and God on my side that I can do anything and most of all, I can make it.” 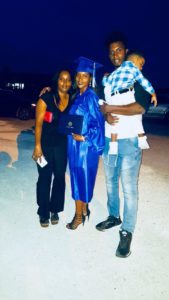 Eldon with his family

UB has been an exchange partner with Thompson Rivers University for 14 years and counting. Eldon August was born and raised in Belize City. In 2015 he received an athletic scholarship from UB to pursue an Associate’s Degree in Marine Biology. The 21 year old student is taking Natural Resource Management courses during his semester at Thompson Rivers University. August has been impressed by the advanced technology and the different styles of teaching he has encountered.

His drive to succeed comes from being focused on family. “As a child, the only figure that I saw as my role model and support was my mother, Michelle Young. I grew up in a single parent household along with my sister Alisha. No father there for us. He left my mother from a young age. Seeing how my mother sacrificed and devoted her life for us to have big aspirations and dreams, I knew I wanted to become a better person and be accomplished and stable in life. Growing up with a single parent wasn’t easy. My mother struggled and worked her way just for us to have the basic things that we needed. During all the rough times and moments of despair the only way I could have kept my thoughts and emotions together was when I found a passion for basketball. The people who inspired me to play basketball were my cousins. We were of the same age and in the evenings, young boys would get together and play and interact with each other. When I was there playing, I felt for that instance, I had issues under control while negative thoughts were kept at bay. From since then, I dedicated myself to learn the sport. I played at school regional competitions and the National Team. The program that helped to developed me as the athlete and person I am today was an extension of the Belize Bank Bulldogs. I also got the chance to play in an international tournament as a Bulldog, an amazing experience.” 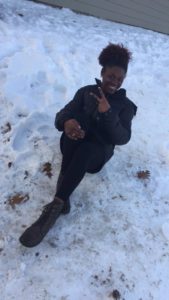 Ashley Middleton has immersed herself into the cultural experience at Thompson Rivers University. She wanted to live in another environment to enhance her overall learning. “I love travelling. I wanted to meet new people and learn a different culture and I also believed that if I studied away from home, it would help me become independent and mature.

The socially active student is taking Human resource Management, Hospitality Law, Sociology, and Events Tourism as part of the UB exchange with TRU. Reflecting on her family in Belize has given clarity to her path. Two of her aunts possess Masters Degrees in Business Administration and she observed their rise in management positions upon their return to Belize. “I think it is they who inspired me. I said to myself, ‘If they can do it at age 48, then I can definitely pursue my masters by age 25.’”

The exchange has also led to her realizing a very specific career goal. As Middleton reflects on the semester she recalls “There’s this specific instructor that made an impact on what I really want to do in Tourism. His name is Billy Collins. He lectures my Event Tourism class. This is the first time I’ve ever taken a class pertaining to events. He opened up my mind to want to study more about events, and I could probably organize events throughout Belize. Hence, I am going to pursue a degree in Events Management.”

The study abroad experience overall has been enriching for Eldon August. It has assisted Ashley Middleton to determine the specific career she wants to pursue, while Erin Gabourel has become more spiritually motivated in her calling to pursue a career in clinical psychology. These students have been given not only a scholarship but an opportunity to engage in a developed country, Canada, its culture and way of life while being able to reflect and consider the path they want to follow as stewards of the University of Belize.

UB President Clement Sankat believes students should be engaged with peers at partner institutions. As these International Exchanges enhance their vistas of the future, better preparing themselves for the global world we live in, mutual understanding, collaboration and cooperation for a better Belize and the world would be achieved. Links with international centers of excellence are not limited to Canada, President Sankat has dialogued with institutions in Mexico on behalf of UB and currently holds a leadership position in Consejo Superior Universitario Centroamericano (CSUCA - Central American Higher Education Council). He intends to pursue the development of the internationalisation agenda at UB focusing on strong academics, sporting and cultural relationships and sharing of resources, especially among the institutions in Central America.