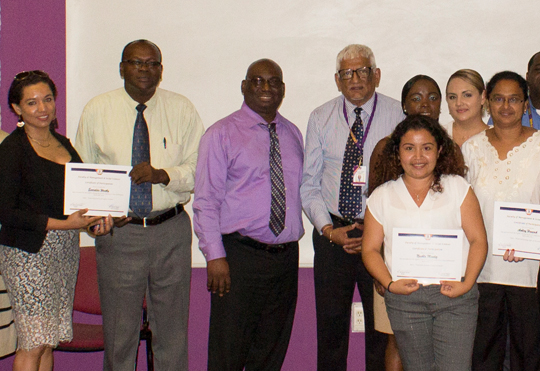 Dr. Bernard Watler, Dr. Nestor Chan, Ms. Juliane Pasos, Dr. Jean Perriott, Ms. Ava Pennill, Mrs. Camilla Barker, Justine Myvett, Jamal Witty and Eniza Orellana appeared on Love FM’s Morning Show on Monday, April 16, 2018. The Deans and Ms. Ava Pennill spoke on the new programs that their respective faculties are launching. Mrs. Barker spoke on the upcoming Open Day to be held on April 26, 2018. Dr. Perriott took the opportunity to invite students to the annual Relathon that will be held on Sunday. Justine, Jamal and Eniza spoke on Earth Day that will be held alongside Open Day and also spoke on plastic pollution and the importance of finding alternatives. 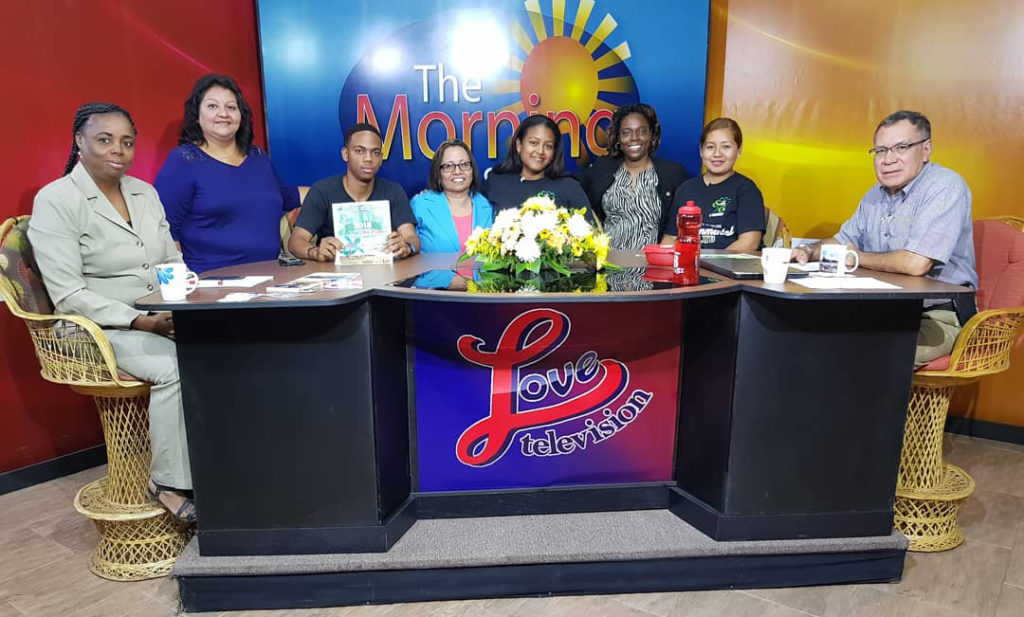 Professor Emeritus Clement Sankat met with UB alumnus Jillian Morrison. Jillian graduated from the University of Belize with a Bachelor in Mathematics. Jillian Morrison is currently a 4th year PhD Statistics Student at Washington State University (WSU) where she is also pursuing a Master’s Degree in Computational Finance. Professor Sankat congratulated Ms. Morrison on her achievements to date and said that she is a wonderful ambassador for the University. He also urged her to complete her studies and return to the UB. Mr. Douglas Morrison, Jillian’s father and also lecturer in the Faculty of Education and Arts, was also present at the meeting.

The Math, Physics and Information Technology Department (MPIT) held its Third Annual Math Symposium under the theme “Mathematics – The Key to Infinite Possibilities”. Professor Emeritus Clement Sankat delivered the opening remarks where he commended the organizers, the Faculty, the Math Club, and the MPIT department. He also spoke on the importance of having a good foundation in Mathematics. The presenters were Ms. Jillian Morrison, Ms. Annia Mejia, Ms. Vanessa Diaz, Dr. Aaron Lewis and Dr. David Aguilar. 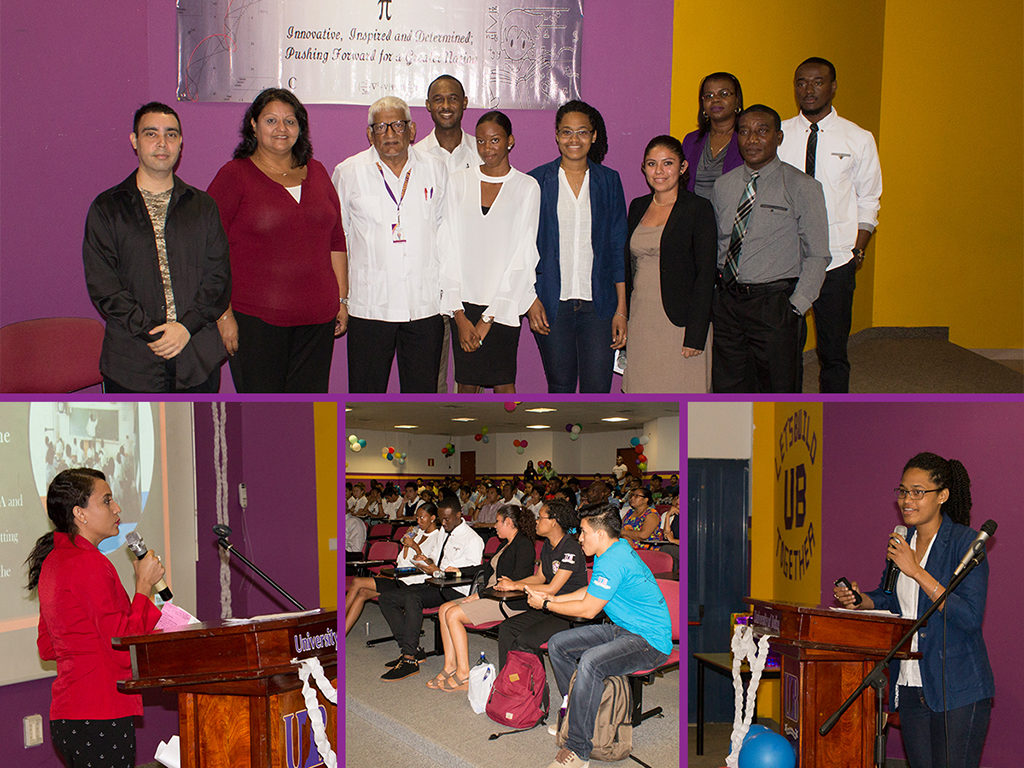 President Sankat met with the Belize Chamber of Commerce and Industry (BCCI) on April 19, 2018 presented UB’s Transformational Plan Vision 2022 to them. Present were the President of BCCI Mr. Nikita Usher, CEO Ms. Kim Aikman and members of the Board. President Sankat appealed to the business community to support the University of Belize through scholarships and bursaries to students and other private/University partnerships for example, residences and buildings on campus. Members commended the University on its direction and urged that our graduates become more entrepreneurial. 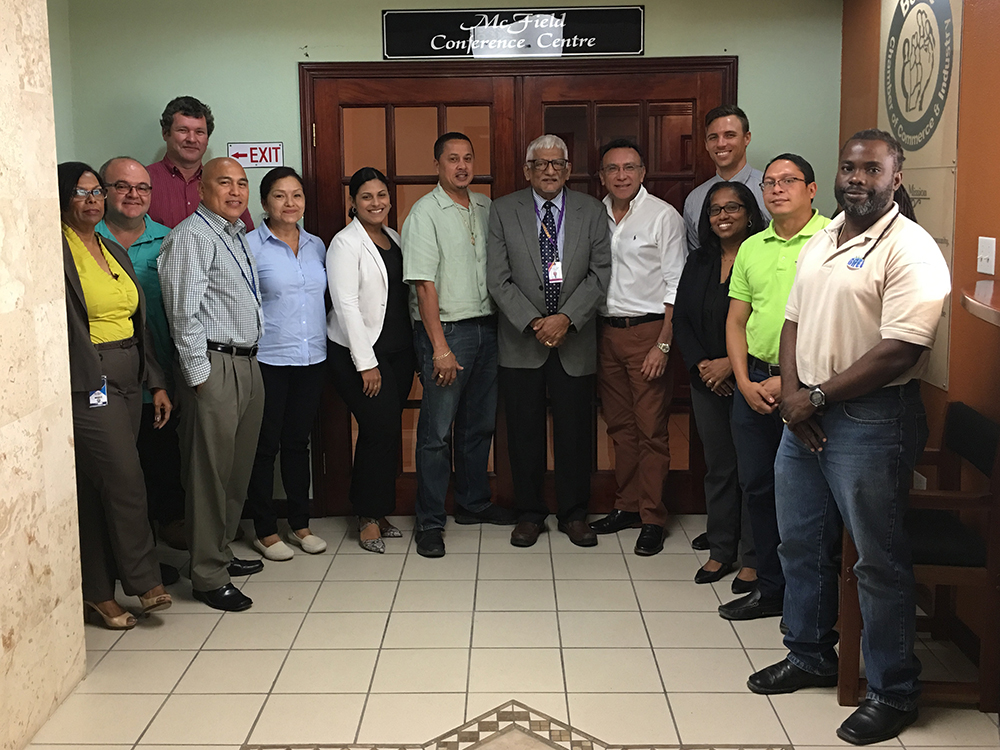 The FMSS held its Annual Research Conference in Belmopan on April 19, 2018. Dean of the Faculty, Dr. Bernard Watler, welcomed the audience and reminded them that, “knowledge only becomes valuable when it is disseminated and applied to benefit humankind”. The keynote address was delivered by Dr. Phillip Castillo, Assistant Professor and 2017 Researcher of the Year. Dr. Castillo challenged the students to, “to undertake localized research that can benefit your immediate community.” The President’s Award for Researcher of the Year was awarded to Dr. Romaldo Lewis, lecturer in FMSS. Professor Sankat presented the award to Dr. Lewis and congratulated him for his research as he congratulated the students also. Dr. Lewis also presented his research entitled “Statistical Clustering of the Micro, Small, Medium and Large Enterprise in Belize and Constraints on their creation, promotion and growth”.

The President also congratulated the Dean and Faculty of FMSS for the good work being done in terms of fostering a culture of applied research in the Faculty and especially through the Senior Students. He advised students that the opportunity for more advanced research at UB will be announced soon, for those outstanding students who wish to pursue MPhil Research Degrees. 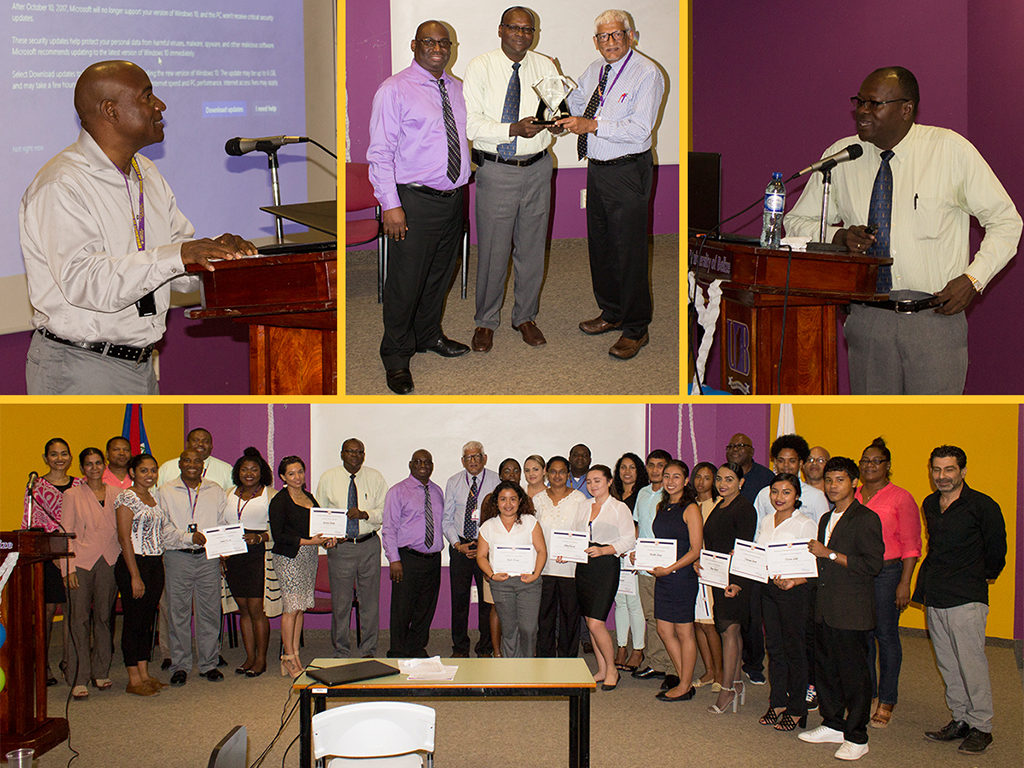 The panel discussion is an outreach activity where leaders from the various levels of the education system as well as leaders from the business community are invited to share their philosophies along with some of their successes and challenges they face as leaders. The event was organized by the students of the course guided by lecturer Mr. Douglas Morrison.

Ambassador of Belize to Guatemala Discusses the Special Agreement 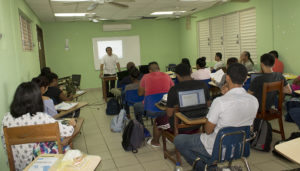 The Belize-Guatemala Relations class hosted Ambassador of Belize to Guatemala, H.E. Alexis Rosado, on April 19, 2018. Ambassador Rosado gave a brief history of the territorial claim Guatemala has on Belize. He then went on to the details of “Negotiating the Special Agreement and the Referendum.” Dr. Mariot Simon, Vice President, was also present at the presentation.

History Lecturer Mr. Cesar Ross noted the importance of this presentation, “considering the ‘excitement’ Sunday’s referendum in Guatemala has stimulated; it is important that we bring focus and understanding to the challenge of the Territorial Dispute and THIS proposal as a final means of settling the Issue. It is important we understand this proposed process and its implications in its ‘entirety’.” 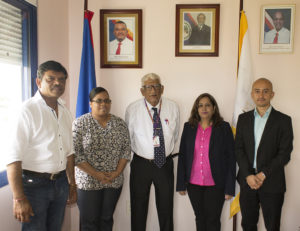 Professor Sankat along with Open and Distance Learning Department Dr. Frieda Palma met with Dr. Kiran Vanjani and Kamal Vanjani of SAI Info-Tech and Mr. Luis Alvarez from ETC Iberoamerica. The intention is to develop professional certificate courses in the ICT and that can enhance the competitiveness of our students in the world of work.

President Met with Former Dean of the Faculty of Food and Agriculture of the University of West Indies, St. Augustine 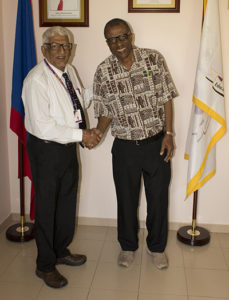 Professor Sankat warmly received his former colleague Professor Carlisle Pemberton, an Agriculture Economist by training, and former Chair of the Department of Agricultural Economics and Dean of the Faculty. Professor Pemberton is engaged in a consultancy in Belize, on behalf of the Food and Agriculture Organization, and looking at the linkages between School Feeding Programme here in Belize and the local Food and Agriculture Sector.

Professor Sankat visited the UB Central Farm Campus and met with students and some faculty and staff on April 18. The students showed the President the state of the dorm buildings and non-functional student cafeteria. The President was saddened as he was concerned about the state of these facilities. On a brighter note however, he saw the ongoing work being done to repair and refurbish the Micro-propagation Lab that was essential to support the EU funded project for the Banana Belt. 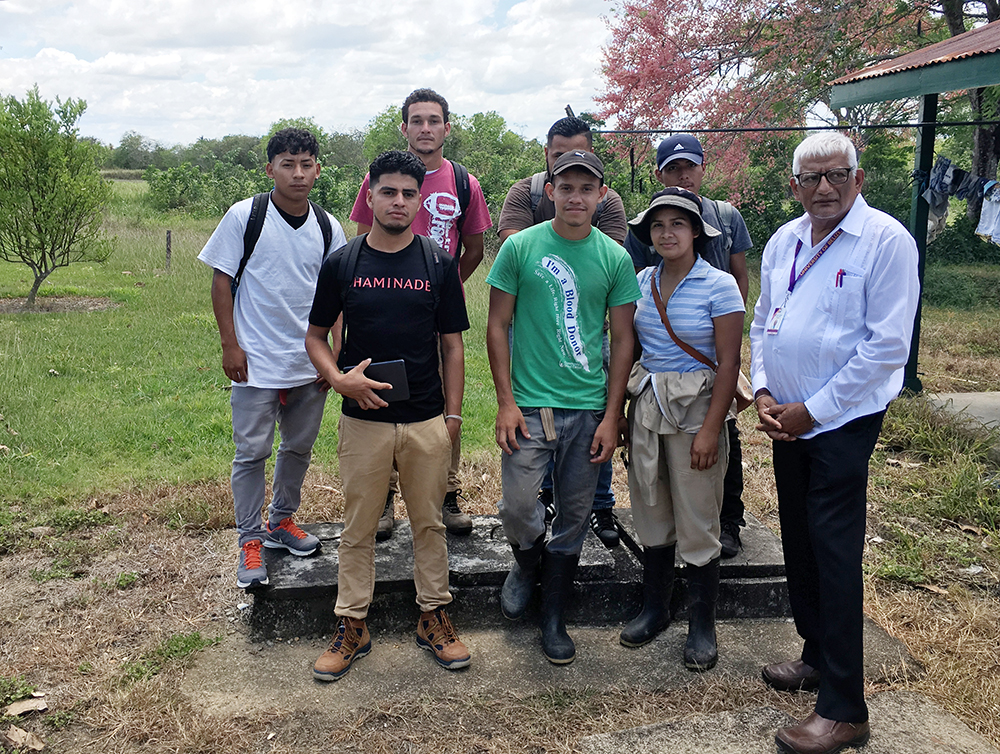 Ambassador of Guatemala in Belize, H.E. Georges de La Roche, paid a courtesy visit to the University of Belize and discussed with the President, matters of mutual interest. 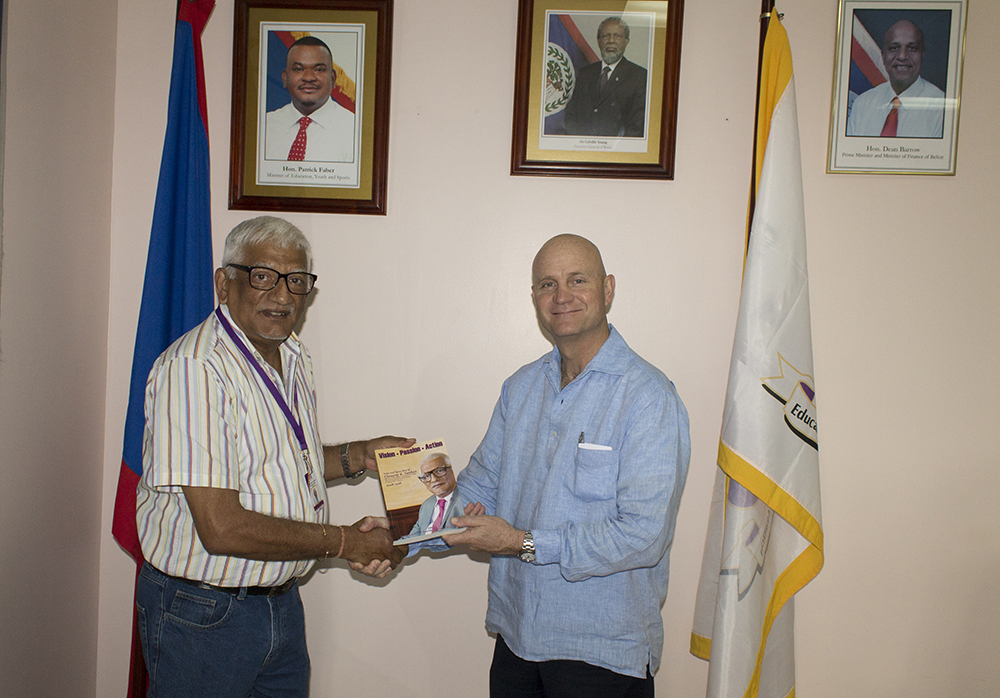