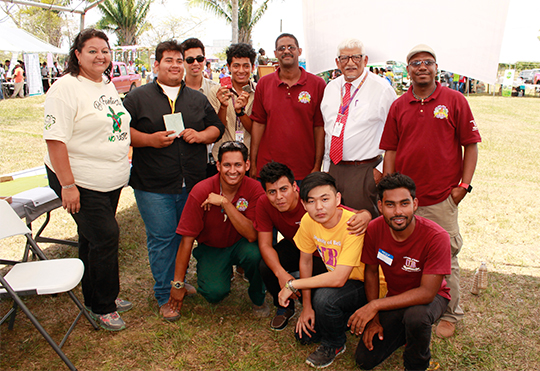 Females Continue to Lead in Relathon

The University of Belize held its annual Relathon on Sunday, 22nd of April 2018. The males had a total of 22 runners and the females had 24 runners. This year the Relathon began at 8:15am and a strong showing by the males had them arriving at the Belmopan junction by 10:00am. This strong start from the men slashed the females’ 20 mile lead in half with 48 miles to go for the males and 38 miles for the females remaining. Both teams became enthusiastic upon hearing of the other team’s location. Despite the best efforts by the males, the females won the Relathon this year. The males finished a minute behind the females.

The best runner for the females was Ansella Rodriguez, a 2017 UB graduate and Varsity athlete, who ran a mile in 6:43 minutes. Tivi Ramos distinguished himself as the best runner for the males after running a mile in 4:43 minutes. Ansella and Tivi received a trophy donated by the founder of the Relathon, Mr. Dudley Marshall, a UB alumnus. The females now have 20 wins and the males 18 wins. Kudos to both teams. Chairman of the Board of Trustees, Mr. Harrison Pilgrim and President Clement Sankat presented the medals to the Teams at the ITVET Compound in Belize City.

The University thanks the students and alumni who participated and kept the longest UB tradition alive. Many thanks to the faculty, staff and members of the community who contributed tremendously to the event’s success especially Dean Perriott and her Team along with Mr. Francis Burns and his Team.

Say NO to Cyberbullying 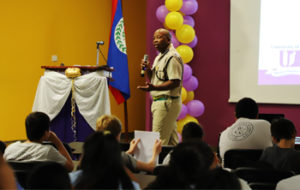 The Faculty of Education and Arts held its second forum on Cyberbullying on April 23, 2018 at the Jaguar Auditorium. This year the focus was on sexting. Sexting is sending, receiving, or forwarding sexually explicit messages, photographs or images, primarily between mobile phones. It may also include the use of a computer or any digital device.

UB students and high school students were informed on the dangers and consequences of cyberbullying. The presenters included Sole Meighan, President of Child Advisory Board (CAB), Councillor Jacklyn Burns, Mr. Kyle Miller from the Department of Youth Services, a representative from the US Embassy and Mr. Chester Williams, Deputy Commissioner of Police.

The Faculty of Education and Arts Third Annual Symposium held on April 23, 2018 provided opportunities to share scholarly work promoting a culture of research and discourse in education. The theme of this year’s symposium was Breaking Barriers: Building on Success! Highlights included research by students on factors influencing students’ performance in mathematics, impact of attrition among secondary students in South Side Belize City. Students’ ability to clearly articulate ideas and use inferential statistics to present research findings illustrated that they are poised to critically analyse national challenges. In addition to presentation by students, the European Union Project Results were presented by Dr. Nestor Chan.

In the poster presentation section, Dr. Nicté Fuller Medina, Erson Moreira, and Kennion Moreira shared their findings on Building research capacity through service learning: notes from the Language, Culture and History project, Dr. Priscilla Brown Lopez presented the findings of the use of Problem Based Learning in Teacher Educational Institutions in Belize. Dr. Angel Cal shared joint research findings entitled, From the Eyes of Spanish Yucatan: The Battle of St. George’s Cay, 1798.

The UB Appointments Committee met for the first time on April 24, 2018. The Committee appointed by the President is considering the applications of Faculty for Senior promotion. The Committee is chaired by Vice President Dr. Mariot Simon and is constituted of several leaders of our University and external professors. The work of the Committee continues. 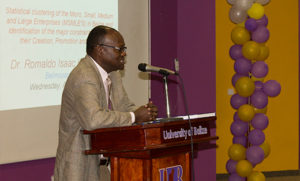 Dr. Romaldo Lewis, Lecturer in the Faculty of Management and Social Sciences, recently completed his Doctoral Degree in Business Administration. His thesis was on ‘Statistical Clustering of the Micro, Small, Medium & Large Enterprise (MSMEL’s) in Belize, and Identification of the major constraints that the limits their creation, promotion and growth. He presented the results of the research on April 25, 2018.

His colleagues and family were also present to congratulate him. Professor Emeritus Clement Sankat and Vice President Dr. Mariot Simon attended the presentation and also commended Dr. Lewis on this achievement.

The University of Belize had a plethora of activities for students and prospective students at its Central Campus on April 26, 2018. It was held under the theme “Embracing Higher Education, Sustainability and Purpose”. The day started with the ceremony for the Open Day where Professor Emeritus Clement Sankat welcomed everyone to the event and spoke of the importance of investing in a university education. The Deans also took the opportunity to speak on the new programs their faculties are launching. Dr. Gordon Holder, Campus Administrator of the Central Farm Campus spoke on the Bachelor of Agriculture that will commence in August and the importance of agriculture for the sustainability of Belize. Mr. Gilberto Magaña, a UB alumnus and now Aftercare Specialist at Belize INVEST, a unit of BELTRAIDE, spoke of his time at UB which he says was, “everything that I expected and more”. Dr. Santos Chicas, lecturer in the Faculty of Science and Technology, said that his education foundation at UB prepared him to excel when he went to study in the Republic of China (Taiwan). Prospective students then had the opportunity to learn more about the different programs, meet their future lecturers and Deans, and experience campus life for a day.

The Faculty of Science and Technology also simultaneously held its Earth Day celebration where it sought to create awareness of the importance of avoiding single-use plastics. The science students also had displays on the effects of pollution as well as exciting demonstrations that science can be fun. The Information Technology students also spoke on the parts of a computer and shared the knowledge they had gained thus far in the technological field. The Faculty of Education and Arts also had a Psychology of Learning Symposium as well. Students were able to view displays and presentations on the various learning theories and strategies used in the classrooms. FNAHSW faculty, staff and students also opened up the Med lab to students and visitors and also did some medical test. The Regional Language Center also treated the visitors to a multicultural fair where the international students showcased the culture, music, dance and food of their home countries. RLC currently has students from Cuba, Colombia Honduras, Mexico, Panama, Republic of China and Republic of China (Taiwan). The Medical Laboratory students in the Faculty of Nursing, Allied Health and Social Work were also celebrating Medical Laboratory Professionals Week and were providing free test with results available on the same day. 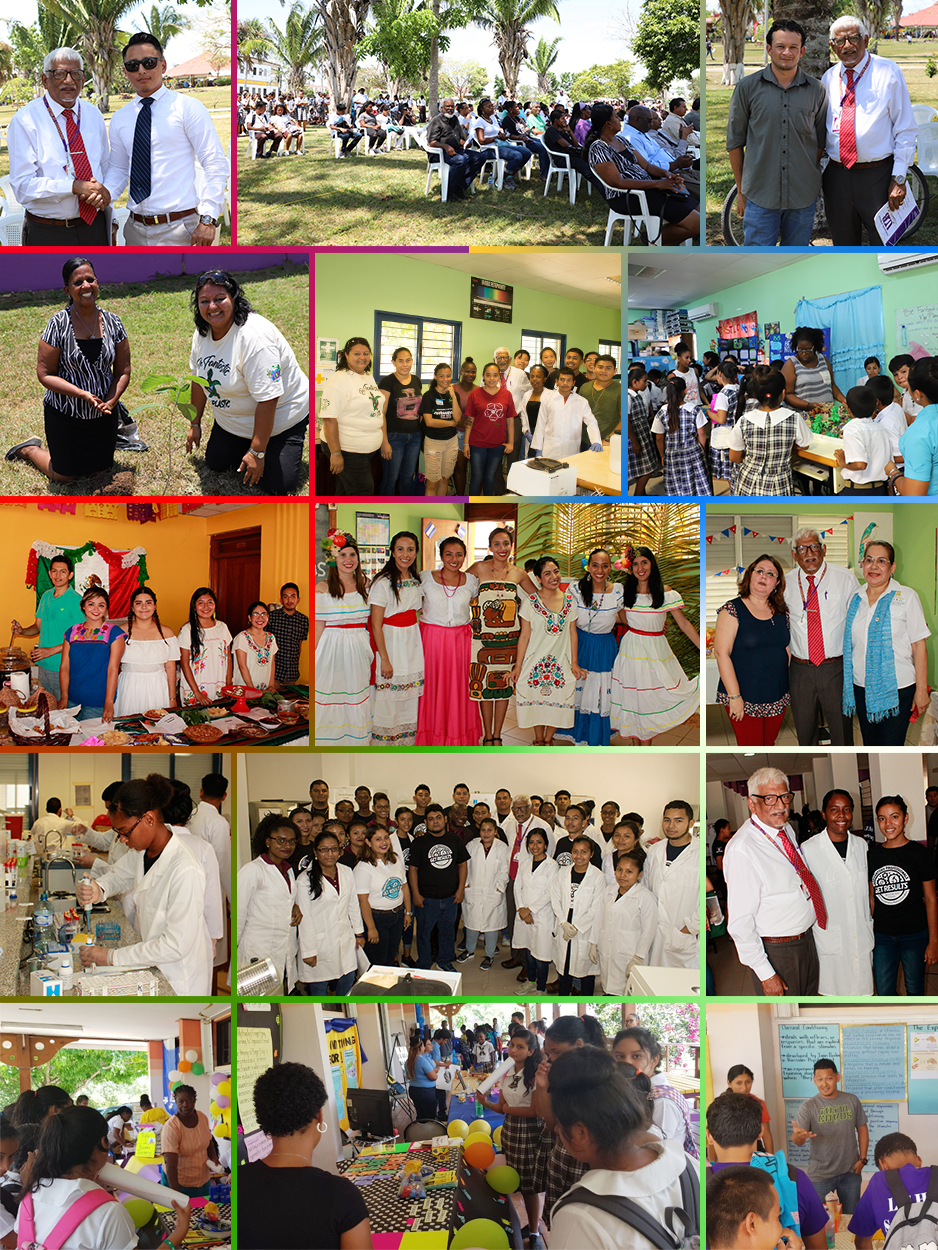 “All work and no play, makes Jack a dull boy” goes the saying, The University of Belize held a day for faculty and staff to have fun together at the Belmopan Campus. The day started with a social ride from Mile 31 George Price Highway to the Belmopan Campus. Then there was a brief ceremony where Professor Emeritus Clement Sankat invited all faculty and staff to join the fun and to build UB together, as there was much to be achieved in the exciting times.

There were competitions in lime and spoon, futsal, needle and thread, volleyball, and races. There was a special treat where employees could ‘pamper’ themselves with manicure, pedicure, and eyebrow shaping and tinting at special prices. Faculty and Staff were also gifted a special token for their service to UB and the President thanks the Director and Staff of the Human Resource Department for organizing the special event.

Professor Emeritus Clement Sankat met with students’ representatives on April 27, 2018. The students considered matters pertaining to students’ projects for the Summer. They also spoke on students who have not met their financial obligations. They also provided their input for the 2018-2019 Academic Calendar. Student evaluation of teaching and the bookstore going electronic were also discussed. The students provided feedback on Sports Day. The possibility of student representation at CSUCA meetings was also considered. Also in attendance was Vice President, Dean of Student Affairs and Mr. Francis Burns, Director of Physical Plant, Projects and Facilities.

UB is Present at the NATS 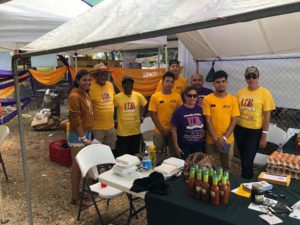 The University of Belize participated in the National Agriculture and Trade Show where prospective students had the opportunity to learn about the new programs that will be offered for 2018-1 and took the opportunity to apply to the University of Belize for free. The UB Central Farm was present on both days selling their produce and engaging with students about the new BSc. In Agriculture. The other Faculty were present showcasing the different services that are available at UB and highlighting their respective faculties. The President represented the UB at the opening ceremony at the Ministry of Agriculture. The Minister congratulated UB on its development of the new BSc. Applied Agriculture Program.