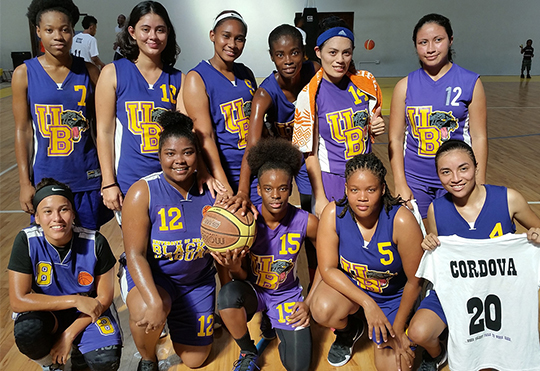 The Lady Black Jaguars competed in the ATLIB nationals on December 8th, 2018 in Dangriga. The team entered the nationals with high expectations after finishing second last year. Their first game was against the Lady Stallions of Centro Escolar Mexico Junior College (CEMJC). The game proved to be too much for CEMJC as UB won very easily 50-2. The championship game was warm-up for the Lady Black Jaguars who crushed the Lady Wildcats of Saint John’s College Junior College 36-0 to once again become champions. Delta Flores was awarded the Most Valuable Player of the tournament.

The Black Jaguars had a tougher day at the nationals. Their first game was against Muffles Junior College. The game was a back and forth affair until the lads asserted themselves in the fourth quarter. UB eventually pulled away to earn a hard fought victory 61-50 to move on to the finals. In the finals, Wesley Junior College led by six NEBL players easily defeated the Black Jaguars 79-65. Our boys played well but after two game ending ankle injuries the team could not recover.

The season for both teams was deemed a success as the Lady Black Jaguars are once again National Champions and the Black Jaguars returned to the national scene after a five-year absence. 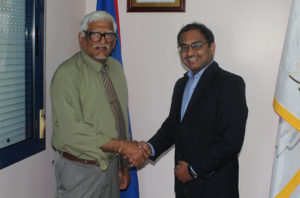 Mr. Naresh visited the project site in the Belmopan Campus and reviewed the infrastructure facilities under construction. They met with the Ministry of Education regarding the final steps of implementation of the project including the shipment of supplies. 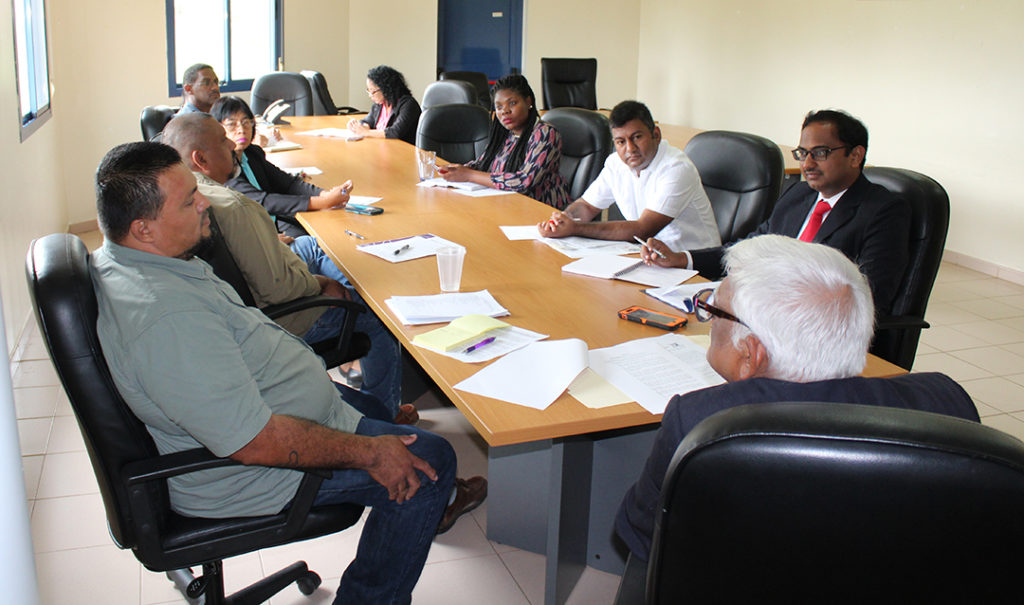 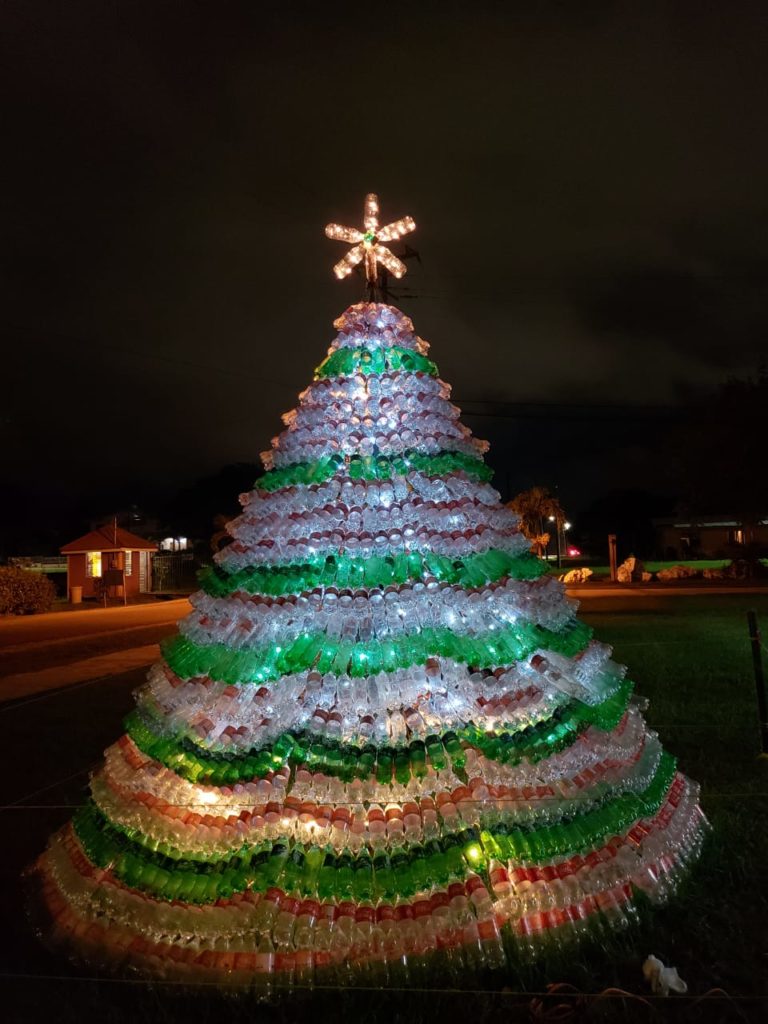 This year’s event, hosted by the University’s Environmental Club on November 28th, 2018, featured a 10 feet Christmas tree made out of 1,852 recycled plastic bottles. UB’s President, Professor Emeritus Clement Sankat, who spoke at the ceremony, remarked that “the tree stands as a symbol of peace and goodwill; and one that should always remind us of the meaning and importance of Christmas as a universal festival.” 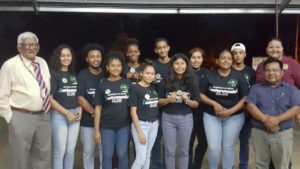 President Sankat, on behalf of the University of Belize (UB), would like to commend the Environmental Club for not only demonstrating to the UB community but also to Belize, the tremendous leadership that our young people are showing for the care of our environment and the importance of recycling. Their efforts in erecting this special Christmas tree, he noted, demonstrated “innovation and creativity and the importance of team work in achieving change that benefits all.”

This initiative was done in partnership with Bowen and Bowen Limited, who has aided UB’s Environmental Club with the creation of a recycling center on Campus for plastic bottles and also with the donation of recycling bins, which are to be placed strategically on the campus.

Viola Tuyud, a student of the University of Belize, recently published a research paper entitled “Antibiotic Resistance Patterns of Pathogens Isolated from Surgical Site Infections at Public Health Facilities in Belize”. The research paper was published in Volume 2 Issue 2 of the Journal of Antibiotics Research. Ms. Tuyud was guided by Professor Thippi Thiagarajan who has experience in research and publication.

The research was a collaborative effort with the Ministry of Health, Mr. Diomar Salazar from the Faculty of Nursing, Allied Health and Social Work.

Abstract
Surgical site infections are amongst the leading cause of morbidity, mortality and cost due to increased hospital stay by patients. A study was conducted to understand antimicrobial susceptibility patterns of major pathogens isolated from surgical site infections in Belize.
A study was conducted utilizing existing data for a nine-year period collected through the Belize Health Information System, Ministry of Health. Raw data from 2009 to 2017 was compiled and arranged in an orderly manner and a detailed statistical analysis was carrying out using SPSS and Microsoft-Excel. Descriptive analysis was conducted to extrapolate sensitivity patterns of isolates. From the 630 samples that were cultured only 50% (315) had pathogen growth. A single pathogen was isolated from 93.3% of the samples while multiple pathogens were isolated from 6.7% of samples. The most common pathogen was Staphylococcus aureus (31.1%), followed by Escherichia coli (17.6%), Klebsiella spp (13.5%), Pseudomonas aeruginosa (9.7%) and Enterobacter spp. (6.45%). Aerobic Gram negative bacteria accounted for 58.1%, while aerobic Gram positive bacteria accounted for 38.4%. Cesarean procedures accounted for the highest number of infections with 28.3% while the age group most affected was between 20 – 29 years of age. Sixty-two percent of Staphylococcus aureus isolates were resistant to Erythromycin whereas all of Escherichia coli isolates (100%) were resistant to Erythromycin. The antimicrobial resistant patterns of the pathogens showed that more than 20% of all isolates were resistant to most antibiotics in all the years of the study with some isolates were seen multidrug resistant. More than 50% of all isolates during the study period showed resistance to erythromycin. Continuous surveillance of SSIs and compliance to regulations is essential and a reduction in antibiotic usage must be targeted as this will help to reduce the development of antibiotic resistance in pathogens. 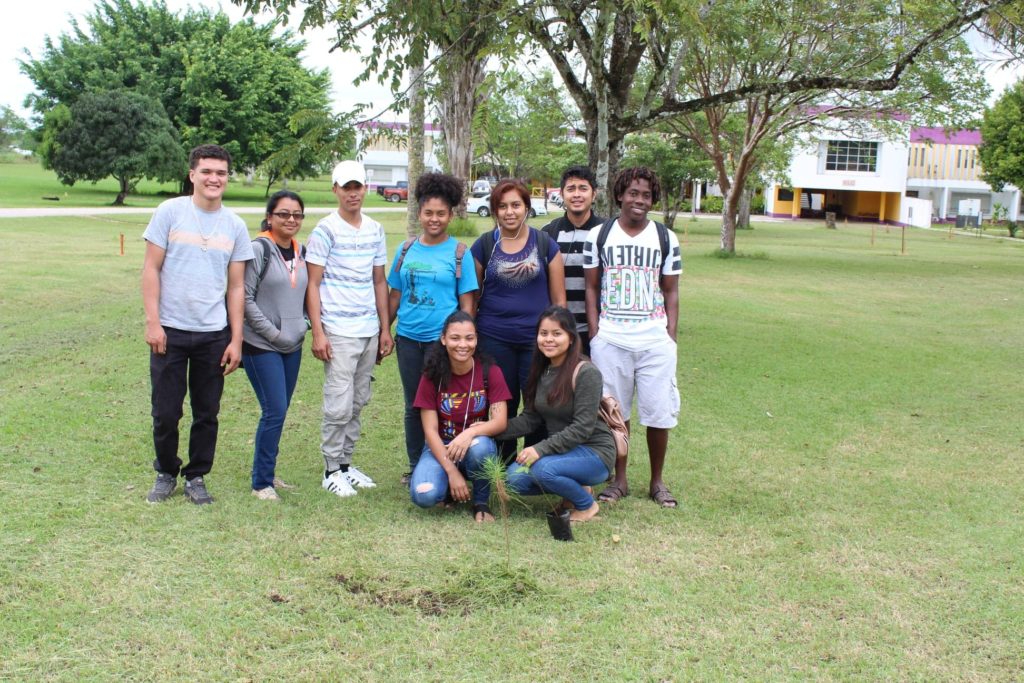 Students from the International Forestry Students’ Association-UB held their first monthly replant session on December 10th 2018 along with some of its members. They planted 20 trees (5 pine and 15 mahogany) to jumpstart this wonderful venture. They collaborated with the Forest Department who donated the trees and a member from REDD+ who documented the momentous occasion. The goal of this project is not only to provide a basis for a more sustainable future, but to also get students more involved in their environment. Look out for more replant sessions with IFSA-UB!

The literacy centres were developed by the 35 students enrolled in the course EENG2151 – Language Arts Methods for Primary Teachers 1, Belmopan Campus. This final assignment is in lieu of an examination. Each student is expected to create two games targeting an assigned Language skill. The purpose of the literacy centre is to nurture the Language skills (listening, speaking, reading, writing, viewing and thinking) through play.

UB and Colombia Meet on Development of New Programs and Research 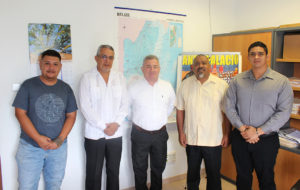 Among the key priority areas discussed during the session are the following:
• development of new programs to be delivered at the University of Belize, within the scope of language, art and culture
• mutual educational and cultural exchange opportunities,
• utilization of technology as a means for added collaboration
• opportunities for research and publishing

Intercultural awareness and immersion in the spirit of mutual collaboration and partnership. All parties will continue to work together with the aim for formalizing a partnership between the University of Belize and Universidad Pontificia Bolivariana de Colombia. 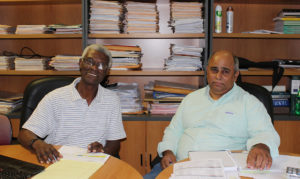 The University of Belize hosted Dr. Charles Wallace of the University of Nicaragua’s Faculty of Health Science. Dr. Wallace along with Dr. George Gough from the Belize Medical Council are providing technical support to assist UB with developing program specification documents for its proposed Medical program.

This visit builds on a collaboration that was established between the Ministry of Health, Belize Medical Council, the National Autonomous University of Nicaragua (UNAN) and UB.

UB Partners with UNCHR to Teach English as a Second Language 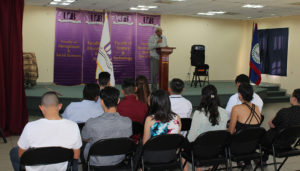 Help for Progress through the United Nations High Commission for Refugees (UNHCR) and UB have partnered to pilot an ESL certificate program catering for young refugee status new migrants to Belize. The students selected for the pilot program had started their secondary or tertiary level studies in their mother country but were forced to discontinue their studies due to migration to Belize. They have been given the opportunity to complete an ESL certificate through UB/RLC to facilitate their transition into local secondary and tertiary level educational institutions or into the work environment, thus into the productive sector.

The first cohort of students has now completed their ESL training at a beginner level and will now transition into an Intermediate intense ESL course. UB has approved the continuity of the program with the primary objective to improve the student’s competence in the English Language to an intermediate to advanced level. The RLC will receive two new groups of students for our January entry and welcome further cooperation with our partners at UNHCR.

Professor Emeritus Clement Sankat commended the students for their courage and determination.

UB-ERI recognized as a US Public Charity

The University of Belize (UB), through its Environmental Research Institute (ERI), obtained its Equivalency Determination (ED) Certification from NGOsource, who certified that the UB-ERI is organized, operated, and funded like a U.S. public charity.

NGOsource is a recognized body in the United States, who assists U.S. grant-makers with making grants to non- U.S. Charitable Organizations outside of the United States. This equivalency status is important for the ERI, which relies primarily on grants and charitable contributions to support its work. This status will also assist the University to meet its academic objectives and financial sustainability goals through additional options for funding as US-based grant-makers will now be able to directly contribute to UB. UB President met with Mrs. Claudia Elena from the Development Finance Corporation on December 3, 2018. The meeting was to discuss how the two organizations can work together to better support UB students who are experiencing financially difficulties. A second meeting will be held in January 2019, where a Memorandum of Understanding is to be agreed to and signed. Mr. Joaquin Magaña of the faculty of Science and Technology has joined the project “INT0093 – Applying Nuclear Science and Technology in Small Island Developing States in Support of the Sustainable Development Goals and the SAMOA Pathway”. The project is a three-year interregional project funded through the Technical Cooperation Program (TCP) of the International Atomic Energy Agency (IAEA). The project aims to strengthen human resource capacities in Small Island Developing States (SIDS) in the application of nuclear science and technology for effective management of coastal zones and marine environment. Mr. Jair Valladarez of the FST participated in a two-weeks training course on the application of nuclear and isotopic techniques in ocean acidification research at the Kuwait Institute for Scientific Research from 18-29 November 2018 in Kuwait City, Kuwait. The University of Belize and the Coastal Zone Management Authority and Institute (CZMAI) of Belize have established collaboration with the National Oceanography Center (NOC) of the UK to execute multidisciplinary program of fieldwork in Belize that aims to help characterize the impacts of changes in land-use management on the fresh water and marine environment. This is a collaborative research program through the UK Government funded Commonwealth Marine Economies (CME) Program.

Faculty and students from the FST as well as technical personnel from the CZMAI joined scientists from the NOC and from the Center of Ecology and Hydrology (CEH) of the UK for one week of field work to collect water samples from the Belize River Watershed (BRW) and from coastal waters of central Belize. These samples were preserved and then shipped to the NOC for analysis of DOC/DIC/POC, organic matter composition, oxygen consumption, and suspended sediments. Other water quality parameters were measured in situ.

Additionally, as part of the collaboration, Dr. Abel Carrias from the FST and Mr. Samir Rosado from the CZMAI visited the National Oceanography Center of the UK in Southampton England from October 1st to the 12th to attend an aquatic biogeochemistry workshop. 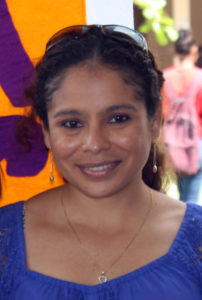 UB’s Mrs. Cecy Castillo of the faculty of Science and Technology (FST) attended a regional workshop on project design based on the Logical Framework Approach and Best Practices under the technical cooperation project RLA0061 “Supporting Human Resource Development and Implementation of Strategic Activities for Nuclear Technology and its Applications in the Caribbean Region”. The event took place in Kingston, Jamaica from 12-16 November 2018. The purpose of the workshop was to share practical information and discuss the designs of the national projects presented to the Technical Cooperation Program (TCP) of the International Atomic Energy Agency (IAEA) for funding consideration for the 2020-2021funding cycle.