Masaki Yanai and Dwayne Cummings both promising students of the University of Belize were recently murdered. This was devastating for many UB students, faculty and staff who had in one way or the other interacted with Masaki and/or Dwayne. The students got together and held a vigil in Belize City and another in Belmopan in honor of their friends.

The President thanks the Dean of Student Affairs, Dr. Jean Perriott and her staff for their efforts of organizing this event at the Belmopan Campus and Chair of the Engineering Department and his colleagues for their efforts in Belize City. 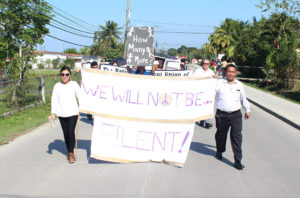 Students of the University of Belize held a peace rally against the crime situation. The murders of Masaki and Dwayne along with others who have suffered because of crime motivated the students to take action and start finding solutions. They invited speakers Mr. Louis Wade Jr. and Ms. Audrey Matura to speak. A recorded speech from Mayor of Orange Walk Town (Dwayne’s community) was also played. They spoke on the importance of realizing how real crime is and how it can affect anyone if action is not taken. The speakers also spoke on the importance of being educated and identifying the root causes of the crime problem in Belize.

Ms. Aleesi Chun, the UB student who came up with the idea of the rally, also spoke to the students, encouraging them to join the efforts not being silent to crime.

The students then proceeded to march to the National Assembly building where they also held a brief ceremony.

On a recent issue, the Marketing and Communications department sent out a Security Alert on Friday, February 15, 2019 with tips on how to treat with personal security in these challenging times. Please review at https://www.ub.edu.bz/security-alert-crime-and-safety/. 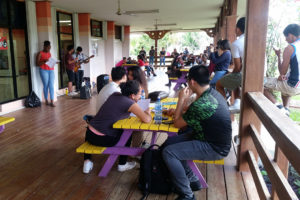 The event was well attended with approximately 40 students excluding the guest artists and program coordinators.
Attendees found the event enjoyable and expressed their desire to return to the next edition.

Future plan for the Student’s Music, Chat, and Talent Hour if the program continues to be a success is to have the event streamed live across all campuses to have full students’ participation.

The University students extend their sincere appreciation to Student Affairs Department for supporting the launch of this event. 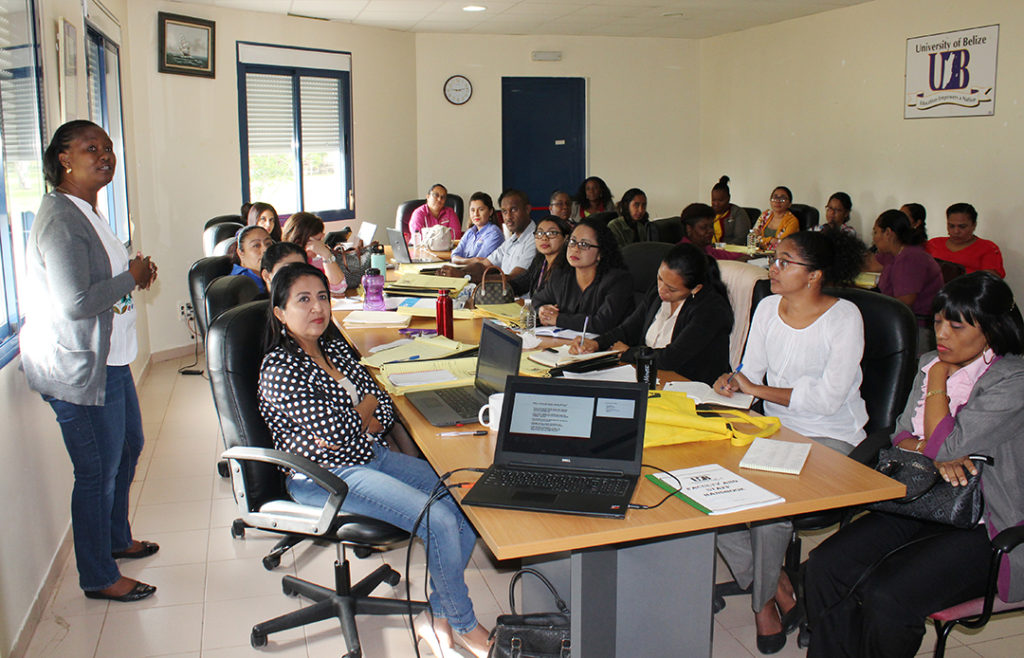 A Records Management Training was held for all Secretaries in the University on February 1, 2019. The purpose of the training was to provide our Secretarial staff with the guidance needed to implement and support a University-wide Records Management System. This will allow for the efficient and systematic control of the creation, receipt and disposition of records, including processes for capturing and  maintaining evidence of and information about the University.

This session was attended by 26 Secretaries, three Chairs and one Dean. 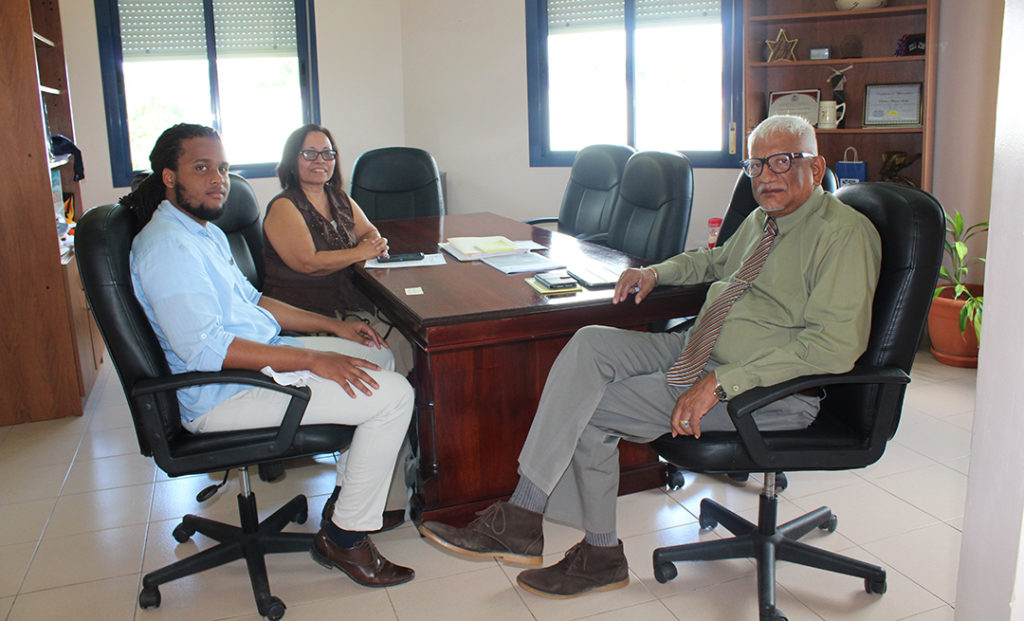 H.E. Kris Miller was recently appointed as CARICOM Youth Ambassador for Belize. He met with President Sankat and Dean of Student Affairs to express a desire to work closely with UB students and the student government. The President congratulated Mr. Miller on his appointment and assured him of the University’s support – one area that the President indicated that needed more communication was on the opportunities for Belizean students/graduates presented by the Caribbean Single Market and Economy (CSME).
H.E. Miller is a UB student and has also been part of the student government. 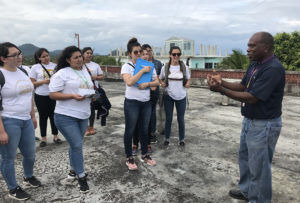 At the opening of 2019, the University of Belize hosted student groups from Texas A&M International University and Texas A&M University in Kingsville who visited Belize to engage in a culturally immersive experience while working with the students, teachers and principals of various Belizean primary schools. Their objective was to study communication disorders exchange knowledge of tools and techniques for speech therapy and teaching practices.

Texas A&M students & professors visited various schools throughout the country as far as Santa Anna Government School, in the Toledo district. Students also spent two days at the Belmopan pre-school on the University of Belize´s Central Campus, and a total of two weeks at the Stella Maris Primary School in Belize City.

While on the trip, the group also visited some of Belize’s most popular destination towns such as San Ignacio, Caye Caulker and Placencia. Groups from Texas A&M have been visiting Belize for the past six years.

As part of the Bachelor Natural Resources Management (NRM) program at the University of Belize, the students and lecturer of the Coastal Zone Management and Policy course visited the Turneffe Atoll Marine Reserve on February 4th 2019. This field component was funded by the Turneffe Atoll Trust’s (TAT) awareness campaign program of their recent document entitled, “Risking the Atoll”. The lecturer of the course, Ms. Cecy Castillo took this opportunity to illustrate to students the “on the ground activities” occurring in ecologically sensitive coastal areas in Belize thereby giving students an opportunity to assess the current coastal zone management plan guidelines with current practices. Mr. Eden Garcia, Marine Biologist also accompanied the group and brought a rich experience to students as he highlighted the impacts of development on Permit fish, one of our valuable fish species in the sport fishing industry. The Ambassador reminded that the Regional Language Center (RLC) was financially supported in its building by the Government of Taiwan and he hopes that the Institution is delivering on its mandate. He wanted to know more about UB and the President shared a lot on our Transformational Plan. He also expressed the desire to work closely with UB in the immediate future. President Sankat also invited him to visit our Belmopan Campus so that he can gain insight into our challenges and opportunities. Chairman, Mr. Pilgrim subsequently thanked the Ambassador for his kind hospitality.

The President met with Student Government leaders on February 15, 2019 at the Belmopan Campus. In attendance was Dean of Student Affairs, Dr. Jean Perriott; Director of Physical Plant, Projects and Facilities, Mr. Francis Burns; and Vice President, Dr. Mariot Simon. The Student Governments presented their projects which they hoped to have completed before demitting office at the end of the Academic Year.
At the Belmopan Campus the students were keen to have a “palapa” constructed by the bus stop to facilitate students. They also expressed a desire to have a water fountain on campus. The President gave the green light for Mr. Burns to begin work on the palapa.

Belize City students wanted classrooms ABC at the Faculty of Management and Social Sciences (FMSS) renovated with new dividers and air conditioning. Again, the President gave Mr. Burns the green light to proceed. Students also wanted the parking lot at the Faculty of Education and Arts paved with the support of the Mayor of Belize City, Mr. Bernard Wagner. A meeting will be convened by the Belize City Student Government with the Mayor to discuss this matter. The President reminded the students on the need to cover the Basketball court of FMSS. In Punta Gorda, the need for a Café was raised and Dr. Perriott and Mr. Burns are to follow up.

Finally, the students raised the matter of Adjunct Lecturers not delivering on their duties, especially in Belize City. The Vice President was asked to follow up with Deans as a matter of urgency.

UB President Presents on Opportunities for Collaboration at COBEC Conference 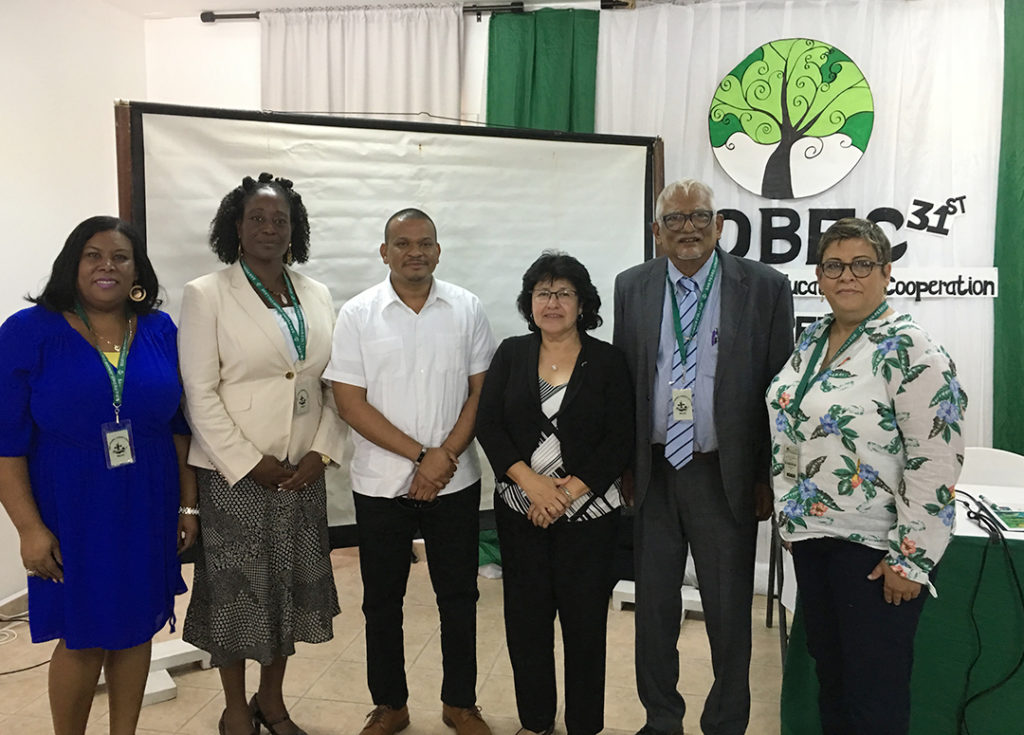 Professor Emeritus Clement Sankat made a presentation at the 31st Conference of the Consortium for Belize Educational Cooperation (COBEC) held at a San Pedro Junior College (SPJC) on February 7, 2019. The presentation was entitled “UB and Opportunities for Collaboration” and can be accessed at https://www.ub.edu.bz/download/cobec-presentation-ub-and-opportunities-for-collaboration/.

In attendance was also the Vice President of UB, Dr. Mariot Simon who also attended the subsequent business meetings. Bernard Watler, Dean of the Faculty of Management of Sciences (FMSS) and Ms. Ethel Arzu, Quality Assurance Officer were also present. On the first day of the conference a workshop on Entrepreneurship was attended by some faculty members of FMSS.

The University of Belize will be the hosts to the next Winter Meeting of COBEC.

UB Meets with the US Embassy Belize, Military Liaison Office Professor Emeritus Clement Sankat along with Business Development Officer Mr. Anulfo Kantun; Director of Physical Plant, Projects and Facilities Mr. Francis Burns; and Technical Assistant Mr. Xavier Novelo met with CPO Alison Fabrao, Operations Coordinator and Ms. Cruzita Cadle, Budget Analyst, from the Military Liaison Office (MLO) of the US Embassy in Belize. The meeting discussed how the MLO can assist the University in its infrastructural projects. Guidance was given to UB on how to apply for such funding and what the priorities are. In the immediate time, UB will be applying for support to build some infrastructure on the PG Campus. The President thanked the MLO for their interest in supporting UB and he looks forward to working with the USMLO in the immediate future. 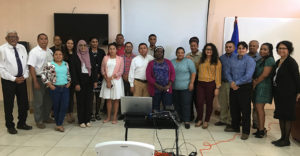 A team from the University of Trinidad and Tobago (UTT) were in Belize to facilitate these meetings and they also visited UB’s Central Farm Campus.

The President attended both the opening and closing sessions of the Agro-Processing Stakeholders’ forum in Belize City and in Belmopan. The objective of the workshop is essentially to prepare a roadmap to invigorate the processing of agricultural commodities into new value added products in Belize. Training in Food Science and Technology as well as Research and Innovation are key drivers for this and there is a role and opportunity for UB here as stated by the President.

Students Have Started their Classes in Educational Leadership 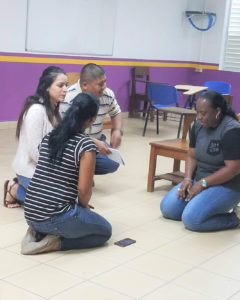 Students enrolled in the Master in Education Leadership attended an orientation session on Saturday January 26, 2019 to discuss plans for the new semester and to become oriented with the first two core courses in their program of study. This informative session also provided an overview of the Student Handbook, Navigating Moodle, Payments and payment plan and an introduction to the use of Ebsco host.
Classes for the M.Ed cohort of thirty eight students commenced on February 2, 2019. A review of students’ perception of the two core courses: EDLD 5022 “Trends and Issues in Education” and ELD 5021 “Foundations of Educational Leadership” revealed that students are of the view that both courses will provide the rigor and skills to create meaningful changes and hone their leadership skills. 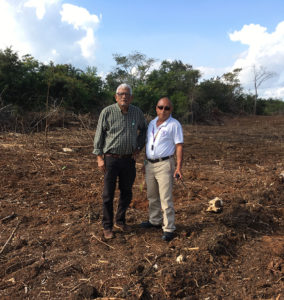 The President along with the Director of Physical Plant, Projects and Facilities Mr. Francis Burns and Director of Public Safety Mr. John Salam, as well as Mr. Arnulfo Kantun, toured the University’s lands on the Belmopan Campus. The President noted the extensive road works being undertaken, as per the approved land use plan, by the Belmopan City Council.

The President through the Office of Institutional Advancement is looking at how some of these lands can be brought into productive use, so as to raise income for the current and future use of the University of Belize. He reiterated that UB’s lands are a prime asset of the University and must be maintained indefinitely for its sustainable use and for generations to come. Mr. Roy Polonio, Punta Gorda Campus Administrator, presented on behalf of the University of Belize a Certificate of Appreciation to Mr. Felix Enriquez, Chief Executive Officer in the Ministry of National Security. The certificate was in recognition of his tremendous assistance through the Belize Defense Force – Light Engineering Company Support & Service Battalion in the demolishing of the old metal barrack at the PG Campus. The Belmopan Bandits along with the Basketball league recently painted UB’s Basketball court at the Gym. The games have started and Bandits has also agreed to have discounted tickets for UB students.