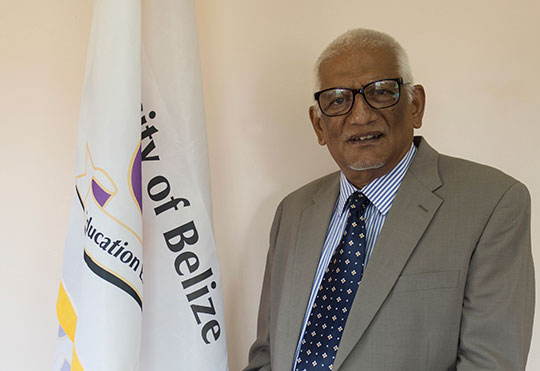 Prof. Sankat’s long and significant service and contribution to UWI includes his service as Principal of UWI’s St. Augustine Campus from 2008-2016. Under his leadership, the St. Augustine Campus became the largest within the Regional University system with approximately 19,000 students, new Faculties and academic staff and new facilities including the South Campus being built in Southern Trinidad. The Campus also received Institutional Accreditation for the first time in 2010 under his stewardship.

When asked how he feels about the award, Prof. Sankat said “I think it is always a good feeling to be recognized for one’s work. For me, UWI has been my life for very many years and I’m therefore very pleased that the university has seen fit to recognize me for my academic and administrative work.” Additionally he noted that it is also important that we learn to recognize our staff, both past and present, for their contribution to taking UB to where it is.

The Minister’s Representative for the Industry Private Sector to the Board of Trustees, Mr. Lynn Young, stated that “Professor Sankat’s recognition as Professor Emeritus at UWI is well deserved and a proud moment for the hundreds if not thousands of engineers in Belize and the wider Caribbean Community, who like myself, were fortunate to be tutored by him at the UWI St. Augustine campus in Trinidad. At UB, we are especially proud and grateful to have such a distinguished Caribbean Educator leading the development of our young and dynamic University.”

UB chairman, Mr. Harrison Pilgrim, remarked that “The Board of the University of Belize is certainly aware of the tremendous value Professor Emeritus Clement Sankat brings to the leadership of our institution and we congratulate our President on the occasion of receiving outstanding recognition by UWI.”