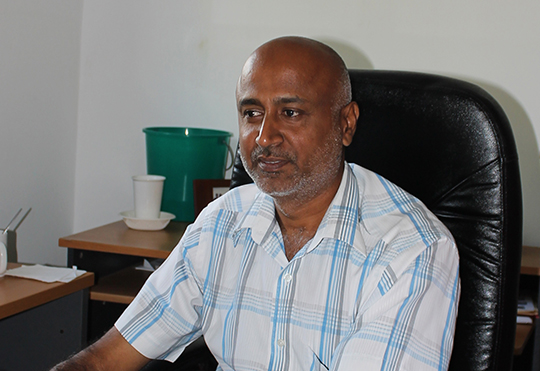 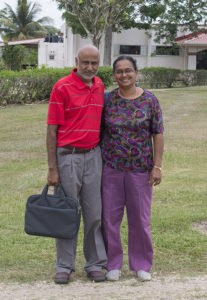 The Board of Trustees of the University of Belize met on Monday June 4, 2018 and agreed to a recommendation emanating from the Promotions Committee of UB, and which was supported by the President that Dr. Thippichetty Thiagarajan, Associate Professor of the Faculty of Science and Technology be promoted to the rank of Professor in Biology. The Promotions Committee which convened recently and consisted of both internal as well as external reviewers all agreed that Dr Thippi, through his long and distinguished service to UB in Teaching, Research and Service had fulfilled the criteria for promotion.

The President noted that Dr. Thiagarajan was an exemplar at UB in terms of his scholarly research and its output in peer reviewed journals. This together with his contributions to teaching and new programme development in Biology in particular, must be applauded and recognized.

On behalf of all at UB, the Board of Trustees, the President and Senior Managers of UB, its Faculty and Staff we express our congratulations to Professor Dr. Thippi and wish him continued success at UB.

About Dr. Thippi
In August 1993, Dr. Thippi Thiagarajan was recruited from the University of the West Indies, Mona, Jamaica as a Biology Lecturer to enhance the Biology Education program offered at the former University College of Belize, a precursor of University of Belize. He came to UCB with a few years of teaching experience at UWI, where he was the first one to receive a Doctor of Philosophy degree in Biotechnology in September 1993. Since 1993, he has been involving his undergraduate students in research activities. He was instrumental in establishing the teaching labs for the Biology and Chemistry programs at UCB. In 1997, he along with some key faculty colleagues like Dr. Leopold Perriott and Dr. Eve Aird, upgraded the undergraduate Education Degree programs to a full-fledged undergraduate degree content oriented programs with option of minors to improve the marketability of the graduates and to attract more student population to make the programs more viable. Many of UB’s current undergraduate programs follow similar model in which undergraduate thesis was made mandatory to expose students to research skills relevant for the development of Belize. In 1998 he applied for a promotion for Senior Lecturer and was promoted to that rank in May 1999 by an independent tenure and promotions committee that comprised of external experts. He was elected as a program coordinator of science programs in 1997 and became the chair of the Science, Education Arts and Technology (SEAT) department in 1999. During this period, he worked as a co-investigator for a research project valued at $ 350,000 Canadian, a project executed between then Malaspina University College, now known as Vancouver Island University and the University College of Belize. This research investigated the physical, chemical and biological properties of the entire Belize river from Black Rock to Haulover Creek Bridge. He also conducted water quality research work on the Haulover creek along with Ms. Karen Bautista and underground water quality of Calabash Caye along with Dr. Phillip Morgan and both works were published in the Journal of Belizean Affairs.

During the Establishment of the University of Belize by the amalgamation of the five key educational institutions, Dr. Thippi was chosen as the dean designate for the Faculty of Arts and Sciences in June 2000. He worked with a heterogeneous group of faculty and staff coming from the amalgamated institutions and made the transition with little or no glitches and made sure the programs and faculty had a smooth transition in to the new institution. He believed in team work and respecting others views if the outcome is good for all the parties concerned. He headed one of the largest faculty at that time. He continued as dean of that faculty until December 2001 and decided to return his passionate area of teaching and research. He was instrumental in improving the teaching labs at the former Technical College campus and lobbied for establishing the position of “Lab Assistants” to help faculty members in preparing labs. In 2003, UB’s main campus was moved to Belmopan Central Campus and during this time he served in some key committees to make the move easier for faculty, staff and students.

Dr. Thippi also became dean once again and served a full term from August 2007 to July 2012 for the faculty of Science and Technology. During this period many programs were enhanced and some underwent a full review process. He encouraged faculty to involve in research and mentored many of his colleagues in designing experiments and writing proposals and articles. During his tenure as dean, he has initiated many faculty and student exchange programs with North American Universities. He collaborated with Dr. Luke Higgins of West Virginia Wesleyan College and sent two undergraduate students for a summer exchange to conduct research on the medicinal properties of Red Mangrove. He also collaborated with Dr. Martina Koniger of Wellesley College and sent two female students for a full summer research internship. The Thompson River University student exchange program has been benefiting many students from UB over the many years. In 2007 he was promoted as an Associate Professor due to the realignment of academic positions at UB.

He is always passionate about students’ academic progress and has taught over dozen different biology courses to a total of more than 5000 students. He expects students to be prepared to handle their courses but works with them in order for them to understand the content. He believes in perseverance, dedication, hard work and most of all acquiring the knowledge and skills that are critical for academic achievements and social mobility. Over the years he has supervised more than 50 undergraduate students for their thesis and mentored many more. Many of those students have gone for higher studies in various fields and are occupying key positions in Government, Non-government and private sectors. He has authored over 20 articles in regional and international journals and made many presentations in local and regional conferences along with his colleagues and students. He continues to assist the department and the faculty in improving the biology program at the University.

He has served in many external committees of national importance such as the National CITES committee, PACT advisory committee, and Board of CZMAI as well as many in-house committees at UB. He has a passion to promote science related activities among school children in order to stimulate young minds towards scientific thinking. He visits primary schools in rural and sub-urban areas to show some hands on activities related to science for the children to overcome the stigma associated with the difficulties of science learning. He believes that a country’s development depends on the science and mathematical skills of its young population. Dr. Thippi has spent all his academic career in Belize serving UCB and UB and made Belize as his home. He is a committed family person from an uneducated agriculture family whose parents believed that education enables social mobility. He is married to a lovely wife and father of two young men. At personal level he strongly believes in doing one’s duty to his or her best ability and only self-analysis can make improvement in a person. We cannot change the world at once, but we can change one person at time and by doing so we can make this world a better place.