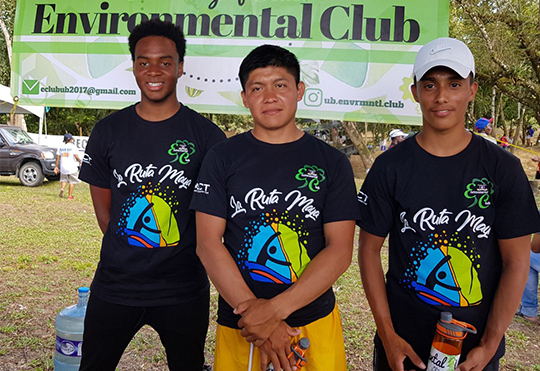 “In 2016 we ranked third in our category. In 2017 we secured second place. This year, it is now time to get the championship trophy and we are working very hard to achieve that dream.” That was the sentiment of Anselmo, Tariq and Eric leading up to the race and they accomplished their dream by paddling to first place in the Intramural Category of the La Ruta Maya Belize River Challenge which took place from March 9th to March 12, 2018.

The team left Hawkesworth Bridge, San Ignacio with fifty-two (52) other teams on Friday, March 9th at 6:30 a.m. and after approximately five (5) hours of paddling placed first in their category arriving at Banana Bank and placed eleventh overall. The following day, the team arrived in Double Head Cabbage, 14th overall but remained first in their category in the second leg of the race. This result remained the same the following day upon arrival at Burrell Boom. On the final leg, the team encountered difficulties with the health of two of the paddlers which resulted in our coming in second that day. They made a lot of progress during the first three days which impacted the overall time. When the results were tallied we still emerged victorious.

The team was accompanied by members of the Student Government, students and members of UB’s Environmental Club who cheered them and simultaneously helped keep the environment clean by cleaning up the river bank. The University of Belize thanks Koop Sheet Metal who were our Black Jaguars major sponsor.