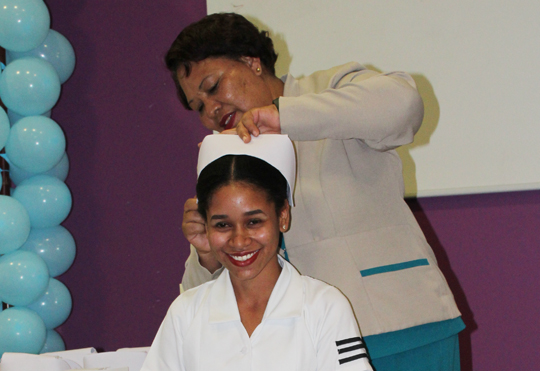 UB Welcomes Back Students, Faculty and Staff to Second Semester (2018-2) 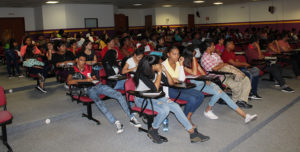 Professor Emeritus Clement Sankat, UB President, took the opportunity to welcome returning and new students, faculty and staff to the University of Belize.

In his welcome statement sent to all he said, “I am confident that in this new year 2019, as one UB Family, we will continue to put UB in the pantheon of teaching, research and public service for national development.”

UB welcomes as of today welcomes 4, 579 students (4, 393 returning and 186 new students). We also welcome the new faculty members who have joined the University.

The University of Belize held a historic welcome back to the third year nursing students at its First Capping and Striping Ceremony on January 18, 2019. The students are ready to start clinical practice and the Faculty saw it as the opportune moment to start a new tradition at UB. Nursing Lecturer, Mrs. Cynthia Guild, welcomed everyone to the grand event by speaking on the importance of striping and capping the students.

UB President Professor Emeritus Clement Sankat reminded the students to always keep in mind why they chose this noble profession and not see it as a mere paycheck. He noted, in his keynote address, “As nurses, you interact with people at their most vulnerable of times… This is a sacred place… the most important… [as] you will have to be able to listen to your patient’s fears and concerns; you will have to be able to communicate with them and for them when they cannot.”

The Dean of the Faculty of Nursing, Allied and Health Mrs. Leolin Swift-Castillo also took the opportunity to share words of encouragement and advice to the students.

Dr. Marjorie Parks, former Deputy Director of Health Services and the first nurse in Belize to earn a Doctorate was the Guest Speaker. She took everyone down memory lane as she presented photos of former nursing students including some who are now nursing lecturers at UB. She also reminded the students that their hearts need to be in the service and caring of others.

The nursing faculty members also took part in the ceremony by reciting the Florence Nightingale Pledge and the Nurse’s prayer.

The highlight of the ceremony was the capping and striping of the proud students. The six males were “coated” and striped by the two male nursing lecturers. Mrs. Ann Matute, Deputy Director of Health Services, capped the 41 female students while the female faculty members took turns in striping them.

Ms. Ashli Swift was the student with the highest cumulative grade point average and had the opportunity to deliver the honor student remarks. 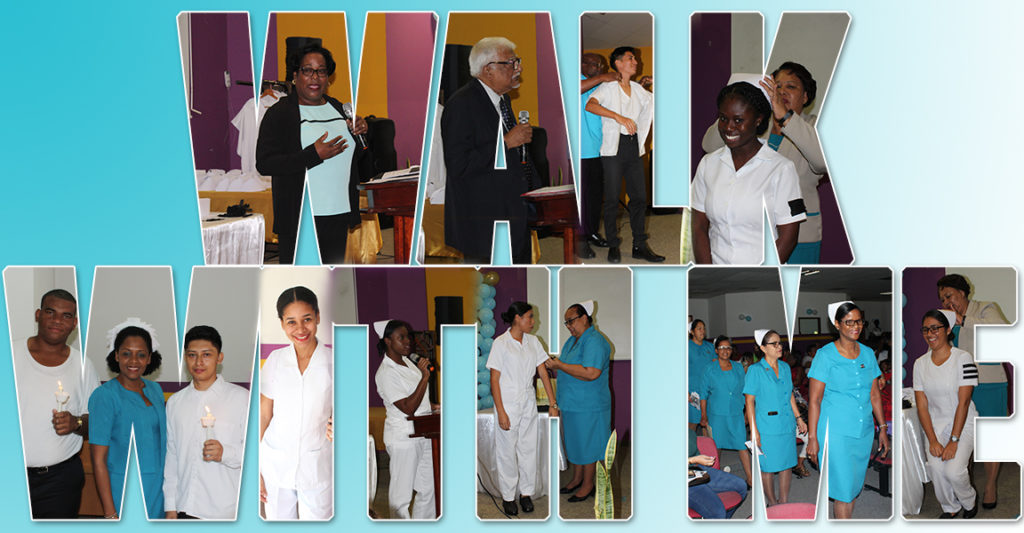 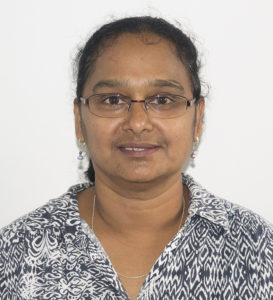 Dr. Somanadevi Thiagarajan, Assistant Professor and Chair in the Faculty of Management and Social Sciences recently published a research paper in the Journal of Finance and Bank Management. The research paper is entitled “An Analysis of Performance of Commercial Banks in Belize during Post Global Recession Period”.

The research paper can be accessed at http://jfbmnet.com/journals/jfbm/Vol_6_No_2_December_2018/3.pdf. The University of Belize held a meeting with a delegation from Bridgewater State University (BSU). The purpose of the meeting was to review the Memorandum of Understanding between BSU and UB. What was interrogated in detail was the student exchange program between the Universities and the challenges that have been faced in this program.

New areas of collaboration that go beyond the Faculty of Education and Arts were also discussed.

The delegation from BSU was led by Dr. Lisa Battaglino, Dean of the College of Education and Allied Studies. She was accompanied by Dr. Wing-kai To, Founding Assistant Provost for Global Engagement, and Ms. Jennifer Currie who is the Associate Director of Institute for Global Engagement. Chief Education Officer Dr. Carol Babb along with Mr. Marvin Kellyman, General Manager of Government Primary Schools represented the Ministry of Education.

This is work in progress. 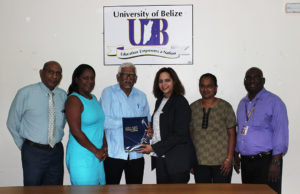 The meeting explored opportunities for collaboration between ALJGSB and UB in the areas of business, management and entrepreneurship.

Dr. Watler and Dr. Simon will be following up on this.

UB President Meets with Dr. Thomas Guderjan from the University of Texas at Tyler (UT Tyler) Professor Emeritus Clement Sankat along with Business Development Officer Mr. Arnulfo Kantun met with Dr. Thomas Guderjan on January 8, 2019. A Memorandum of Understanding has already been approved for the Presidents of both universities to sign. It is expected that this will happen when the President of UT Tyler visits UB, very soon.

UT Tyler is already collaborating with UB’s History department on the proposed programs in Archaeology and Anthropology. The programs are expected to be ready for the next academic year once they have been approved by the Board of Trustees.

President Sankat at the invitation of the Association of Tertiary Level Institutions in Belize (ATLIB) presented to the gathering of ATLIB members UB’s Transformational Plan. The presentation was made at Muffles Junior College in Orange Walk on January 22, 2019. The President of the ATLIB, Dr. Sharmayne Saunders who is also a member of the UB Board of Trustees, was thanked for ATLIB’s kind invitation.

Professor Sankat at the invitation of Mr. Armando Gomez, Manager of the Institute for Technical and Vocational Education and Training (ITVET) in Orange Walk, was delighted to visit the Institute. He congratulated the manager and staff on the work they are doing. He was given a tour of the library, workshops and computer lab where he also had the opportunity of informally engage with students.

President Sankat looks forward to collaborate with ITVET in the area of Technical Education. He was accompanied by Vice President Dr. Mariot Simon and Business Development Officer Mr. Arnulfo Kantun. 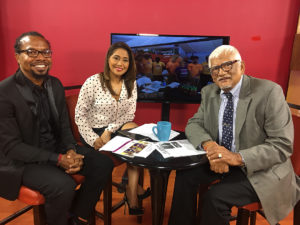 Professor Emeritus Clement Sankat appeared on Channel Five’s Open Your Eyes morning show on January 24, 2019 to provide an update on UB’s Transformational Plan. He also spoke on the financial challenge that UB faces.

The show was co-hosted by Marleni Cuellar and Kevin Arthurs and the President was very appreciative of the invitation to appear.

UB Receives Equipment for the India-Belize Center of Engineering (IBCE)

Over the holidays work continued on the IBCE. The buildings are now about ninety percent completed. The University has also received the first shipment of equipment from India for the IBCE on January 16, 2019.

More equipment is to arrive very soon to be followed by experts from India who will install them.

Meeting New Infrastructural Needs – The Board of Trustees Visit In treating with the infrastructural needs of UB and specially in the Belmopan Campus the Chairman of the Board of Trustees (BOT) Mr. Harrison Pilgrim along with Board members Mr. Lynn Young, Mrs. Michelle Longsworth and Dr. Fred Shyu visited the dorms and were also given a tour of the IBCE on January 17, 2019.

The BOT is actively considering funding for increased space required for the new Faculty of Health Sciences – Medical School and the Engineering School that will be relocated to the Belmopan Campus once the facilities are in place, as well as enhanced infrastructure to meet the needs of a growing student/faculty/staff population and that of a modern University. The President has described the matter as urgent. 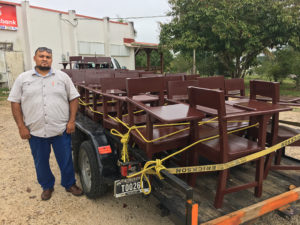 The numbers of students at UB has increased; there is the need to accommodate the new students. Therefore, the University saw fit to acquire 100 new chairs to accommodate students in Belmopan and Belize City.

President Sankat thanks Mr. Francis Burns and his team for the steady support and vigilance in these matters. 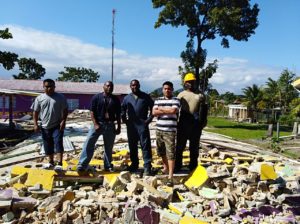 On the recommendation of the President, the old metal barrack at the Punta Gorda Campus has been demolished and cleared. It was previously described as a “sore eye”.

President Sankat commends Campus Administrator Mr. Roy Polonio for the work done. He also expresses gratitude to the Belize Defence Force and Mr. Bismark Ranguy for their assistance in demolishing and clearing the debris.

A new building will be erected on the existing floor slab once the funding becomes available. 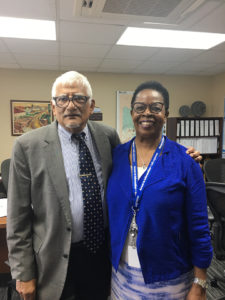 Professor Emeritus Clement Sankat met with Inter-American Development Bank (IDB) in Belize City and through video conference with the IDB representative in Washington DC (Ms. Christina Simon from IDB Invest) on January 24, 2019. The meeting was to explore opportunities for capital assistance from the IDB, which is led in Belize by Dr. Cassandra Rogers, a former Engineering Colleague ¬of the President at the University of the West Indies in Trinidad.

The Department of Youth Services under the Ministry of Education, Youth, Sports and Culture announced the appointment of Mr. Kris Miller as the second of two CARICOM Youth Ambassadors to represent Belize. 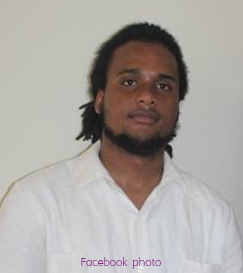 Mr. Miller is a 22-year-old youth leader and advocate from the City of Belmopan and is pursuing his Bachelors of Science in Social Work from the University of Belize. He was also one of Belize’s representatives at the 2018 Commonwealth Heads of Government Meeting Commonwealth Youth Forum held in London, United Kingdom. Mr. Miller is the most recent recipient of the Youth Minister’s Award for Leadership and Advocacy.

His Excellency Kris Miller will serve a two-year term from January 2019-January 2021. The President and the Students, Faculty and Staff of the University of Belize extend sympathies to the family, friends and History Department on the passing of Mr. Joseph Sampson.

The Faculty of Education and Arts held a tribute for Mr. Sampson on January 8, 2019. At his funeral the following day, Chair of the History Department, Ms. Francine Sabal paid a tribute to him.

Below is an extract from Ms. Sabal’s personal reflection on Mr. Sampson. It sums up, in essence, who Mr. Sampson is and was to UB.

“He has helped the university tremendously, not only though his teaching and media appearances but also by giving of himself emotionally and financially to students, staff and lecturers. He was an advocate for young people… He believed in empowering them, showing them the possibilities, and giving them opportunities. One of his favourite songs was by Whitney Houston, the Greatest love all. The first couple lines was the reason he loved the song: “I believe the children are our future, teach them well and let them lead the way, show them all the beauty they possess inside.” Mr. Joseph Sampson truly lived by these words. Even though he is no longer here with us, the wisdom he shared will live on in our hearts.