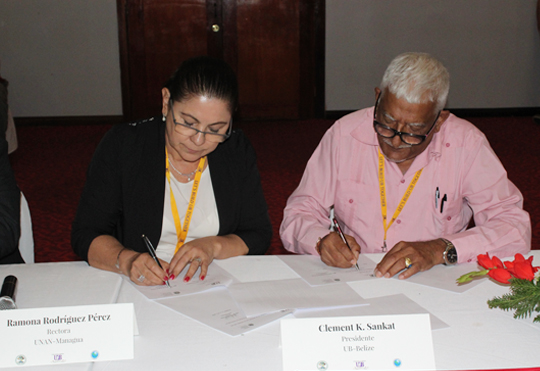 During the two-day session, the Central American Council for Higher Education received the Secretary General’s Report on his activities for 2018 and approved the Auditor’s Report on the Council’s finances for 2018. The appointment of an Assistant Secretary General for Student Affairs was also approved. The Council engaged in critical yet ambitious priorities for strengthened cooperation and deeper integration amongst and between member universities. Discussions proved ultimately fruitful and as a group, the council agreed on a direction for the coming academic year, 2019-2020.

Given the current global context, the key topics discussed at this year’s session were:
1. The harmonization of the cost of tuition between the universities to allow for easier access to higher education for nationals of CSUCA members within CSUCA Universities
2. The internationalization of CSUCA Universities; and
3. The need for the CSUCA Universities to expand its reach and role within the region for deeper integration to not only ensure access to tertiary education, but also to ensure CSUCA Universities offer programs that are relevant, innovative and applicable to the needs and priorities of the various societies in an effort to drive the development of our region.

Also discussed were programs of out-reach that make Universities of Central America more socially responsible to our rural populace.

Equally of importance was the implementation of a Master’s Program in Disaster Risk Management, whereby all CSUCA nationals would be able to access this training starting September 2019.

There was also a rich discussion on matters pertaining to Universities and University students in Nicaragua and CSUCA agreed to allow the process of reconciliation to take its course. CSUCA also accepted an invitation for the next meeting to be hosted by UNAN-M.

The President of the University of Belize and in his capacity as President of CSUCA for the 2018-2019 year, Professor Emeritus Clement Sankat, thanks the Secretary General Dr. Carlos Alvarado Cerezo and his team as well as the Presidents and Rectors of CSUCA Universities and CSUCA’s Secretariat for a successful, spirited and productive session. The contributions of our students through FEUCA were exceptional. President Sankat also thanks his team from the University of Belize for the exceptional work in hosting this historic meeting in Belize.

CSUCA is devoted to the deepening of our multilateral relations and to improving the quality of higher education in Central America in order to achieve the common good of Central America and the Caribbean to fully participate in the solution of national, regional and global problems.