The Innovators award was presented to the University of Belize from the Caribbean Association of Pharmacists (CAP) during the 37th annual convention that was held in Belize from 6th to 13th of August, 2017.  The award was the culmination of the work that went into the implementation of the Bachelors in Pharmacy Program in Belize. The convention included pharmacists from Canada, USA, Europe and across the Caribbean. The prizes included a trophy, a plaque and an electronic subscription to a pharmaceutical compendium.

The convention was hosted by the Pharmacists Association of Belize (PAB) and it included a week of education, exchange of ideas and fellowship. Senior Pharmacy lecturer at UB Lydia Thurton said “attending the conference for me was very inspiring. The award helps the work we have done in planning, proposing, all the work that went into developing the Bachelors in Pharmacy as a program, and to have it become a reality. So this award really does wonders in motivating us with the work we have ahead of us.”

At the conference both Lydia Thurton and Yusuf Abubakar made academic presentations. Abubakar, a lecturer since the inception of UB and part of the team that has worked on the transition of Pharmacy to a Bachelors Program simply stated “what we are seeing is pharmacy is moving forward in Belize.”

Two of the pharmacy students, Emily Manzur and Daemon Acevedo received scholarships from CAP to attend the conference based on their academic performance. 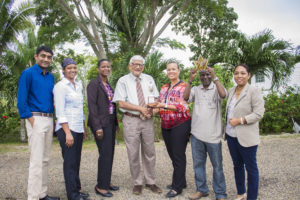 Professor Emeritus Clement Sankat along with representatives from CAP and FNAHSW